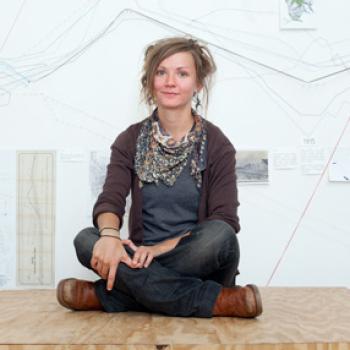 Marian April Glebes is an emerging conceptual and mixed-media artist. Her works address issues of the urban/suburban environment, the character and power of the artist, and the use of site-specificity and the art object as a tool for social change. Glebes’s work has been included in solo and group exhibitions, including shows at Arlington Arts Center (Arlington, VA, 2015), Co-Prosperity Sphere (Chicago, IL, 2011) and the Adkins Arboretum’s Gallery and Outdoor Sculpture Biennial (Ridgley, MD, 2013, 2014). She has worked with a number of Baltimore venues and artist-run spaces including Artscape (2009-2016), The Neighborhood Design Center, Baltimore Arts Realty Corporation, and GBCA. She received her BFA from MICA in 2004 and her MFA from UMBC in 2009, and is currently pursuing a Master’s in City and Regional Planning at the University of Pennsylvania’s Weitzman School of Design. Since 2012, she has also taught at MICA in the General Fine Arts Department.